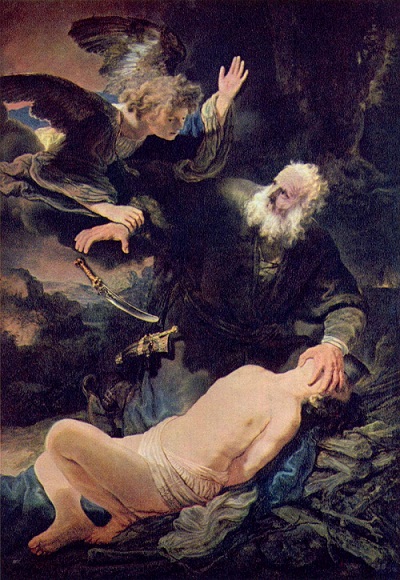 The sacrifice of Isaac

He knows where Abraham gets the mustard.

That’s a Dutch proverb. We do say it of someone who’s well known somewhere, well versed, and who finds ways to reach his goals. But not many people did ever wonder where this wonderful expression comes from. What has Abraham to do with mustard, the mustard plant or the spicy spread made from mustard seeds making the fries or cheese tastier? In Dutch: “mosterd”. Nothing! We should say: he knows where Abraham gets the bundle of branches. And the very old word for that bundle is in Duth: "mustard". So it's a linguistic corruption. For isn’t it in the history of Abraham’s sacrifice of his son Isaac that Abraham himself splits the wood for the burnt offering, and, as they go on together, lays it on his son’s back, and also arranges it on the altar?

It’s a familiar story, but it’s still a strange one, a story that raises many questions for us, with all kinds of sides and hidden layers. But it’s also a beautiful and moving story. At least if we don’t immediately give our aversion all the space. What kind of cruel primitive god is that, who demands human sacrifice? I don’t think we should read it with that attitude. Because already in the introductory sentence, it’s indirectly indicated that God will not let it come that far.

And it’s also immediately indicated, what God is most concerned about. ‘After this, it came to pass that God put Abraham to the test.' The Lord lets Abraham take an exam in faith.

How do you prove that you've sufficient knowledge of a school course? If you successfully pass an exam. And the more difficult the exam you pass, the more you show that you’ve mastered the material.

The Lord is merciful and gracious,
slow to anger and abounding in steadfast love.
He will not always accuse,
nor will he keep his anger forever.
Psalm 103 : 8 en 9